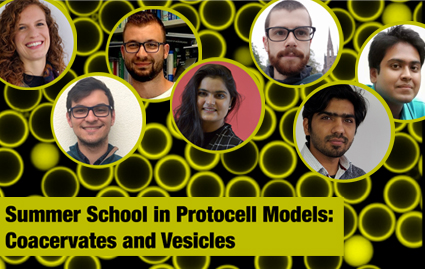 In preparing for our first Summer School in Protocell Models, we asked several of the PhD students funded by the ITN-ProtoMet Project to discuss their PhD research projects, their background and motivation for entering this field, and their vision for the future. The diverse research projects that they are pursuing show the many avenues available within protocell research. One thing is certain in talking with this group: they are all excited about unlocking the mysteries of the origin of life.

Nemanja Cvjetan, originally from Serbia, is based in the lab of in the lab of Prof. Dr. Peter Walde at ETH Zürich, Switzerland, working on the project “Lipid vesicles as protometabolic enhancers.”

Anju, originally from India, is conducting her PhD research at University of Trento on developing a primordial aconitase and iron-sulfide peptide catalysts.

Nino Lauber, from Austria, is working at University of The Basque Country, exploring ‘minimal metabolism’ as a central concept for understanding the origins of life and developing systems biology.

Savitashva Shringi, from India, is currently working at Elvesys Innovation Center, Paris on the Development of a microfluidic platform for Protometabolism.

Rudrarup Bose, from India, is working in the group of Dr. Dora Tang at the Max Planck Institute of Molecular Cell Biology and Genetics on elucidating the effect of coacervate compartments on metabolic reaction networks.

Trained as a medicinal/organic chemist, Alvaro finds this field particularly fulfilling, “I find the investigation into origins of life fascinating because of the way researchers can approach the topic. For a long time, this question was mostly philosophical.  However, it is interesting to think about this area in a logical and scientific manner.” Rudrarup notes that finding solutions to the origin of life puzzle “would shed light on whether it is an accidental phenomenon or a very natural consequence under certain conditions. This would in turn guide us regarding the chances of finding life elsewhere in the universe.”

Anju also is intrigued by this age-old question: “I chose this field because it explains numerous things related to the origin of life and cell biology.  Also, it helps us to explore the most ancient cofactors responsible for several chemical reactions in living organisms. The inorganic cofactors could have facilitated the compartmentalization on early Earth.” The main idea of Anju’s project is to find a prebiotic pathway from prebiotically plausible peptides to design an enzyme like structure. These peptides can co-ordinate the iron-sulfur clusters to catalyse the steps of reverse citric acid cycle. Savistashva finds the same questions compelling, but takes a different approach through microfluidics. He is seeking provide an integral microfluidic system capable of controlling the chip environment to potentially reconstitute entire metabolic pathways. “I was quite fascinated with my project’s aim to understand the prebiotic chemistry and how it supported the development of early cellular life forms.”

Camila is drawn to the myriad of applications of scientific methods under the umbrella of protocell research: “I find this topic fascinating because it is so multidisciplinary. It allows me to develop skills in chemistry, biology and physics while working on a single project.” Her project aims to use the increased control and reproducibility provided by microfluidics to better understand the role of compartments and pH in the context of the origins of life.

Nino comes from a Physics background, but his current line of research can best be described as Prebiotic Systems Chemistry. He too appreciates the overlap of many scientific areas: “I chose this field because it is very interdisciplinary and I enjoy engaging in discussions with people from various backgrounds!”

Savistashva is seeking provide an integral microfluidic system capable of controlling the chip environment to potentially reconstitute entire metabolic pathways. “I was quite fascinated with my project’s aim to understand the prebiotic chemistry and how it supported the development of early cellular life forms.”

Rudrarup is exploring the biochemical pathways in living organisms which interact in specific ways in order to exhibit complex phenomenon. “These biochemical pathways are mostly compartmentalised, be it the organ level, tissue level, cellular or sub-cellular level. In a similar manner, if we are to think of the origin of life, it is likely that compartmentalisation could have aided in attaining complexity. Thus, here I am trying to integrate protometabolic reactions with coacervate compartments.”

Nemanja’s project focuses on the role of the compartments in potentially prebiotic scenarios: "One challenge is to develop simple compartment systems with some of the features of living cells. Discovery of such life-like properties leads to an insight into the minimal requirements for a system to have a desired function. In the unique case of vesicles, an aqueous interior is separated from an aqueous environment by a thin, semi-permeable membrane. The likely appearance of vesicular systems in prebiotic times resulted in the emergence of entities and diversity, one of the crucial features of life. In order to further increase the level of complexity in such protocelullar vesicles, I am searching for possible roles the membrane itself could have played, for example, in the promotion of membrane-located chemical reactions."

Looking toward the future, Alvaro says, “I think protocell research will contribute to different disciplines and build upon the amazing discoveries already achieved. In discovering chemical networks in a cell-like model, we may come closer to finding a route to Earth's earliest form of life. Nemanja also has great expectations of the field: “My hope is that a stronger interdisciplinary collaboration and systems approach will bring us one step closer to the formation of functional protocell models.” Savitashva adds, “I feel that during recent times, the enhancement in our capabilities vis-à-vis manipulation of submicron objects has given rise to the possibility of accessing new paradigms in evolutionary biology and life sciences in general. The understanding of the origin of life could also help scientists and researchers in the domain of early disease detection to better navigate their research work.”